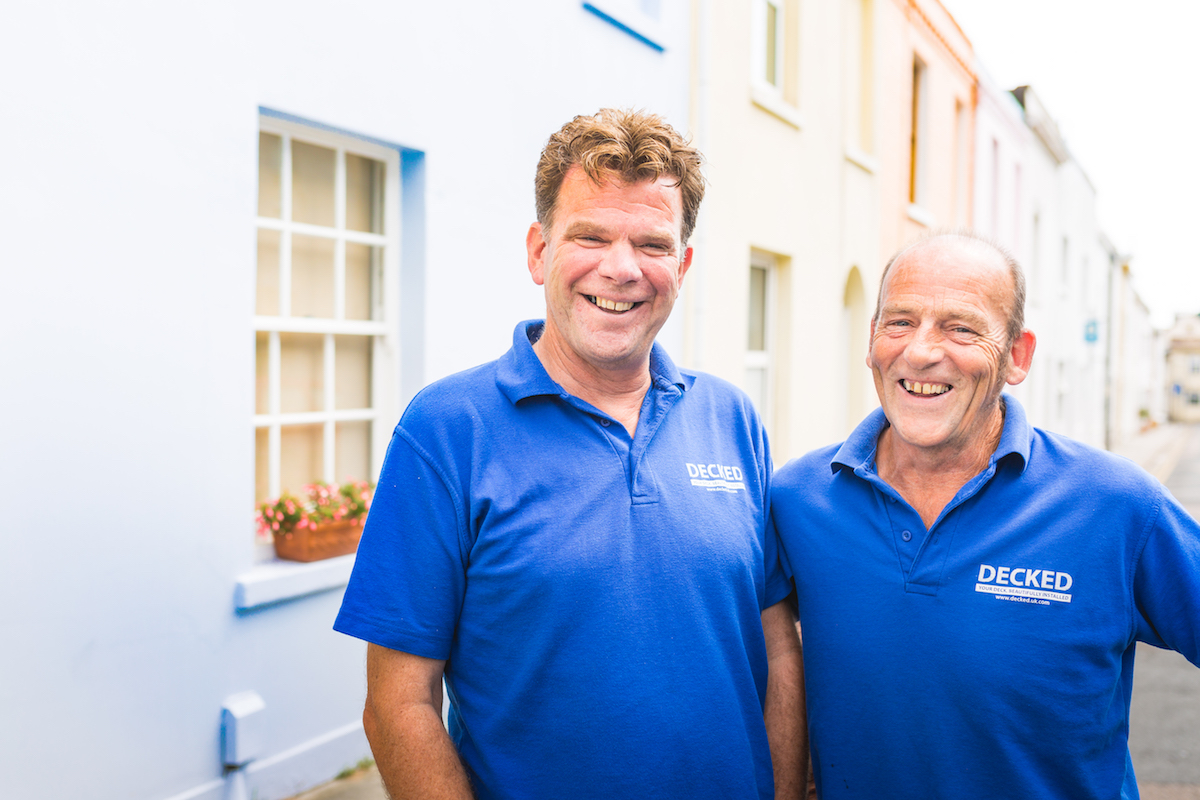 You don’t so much talk to Bill and John about their business, as bask in the white heat of their passion. They radiate enthusiasm. It’s infectious.

The product? A twist on garden decking, called iDecking.

“I’ve been in the building trade for forty years on and off,” explains John. Then suddenly – boom! “I was installing a large balustrade which required a new decking to be put down.” Only this time, the decking he was asked to fit was a little different. It was an Italian system that he’d never seen before.

It’s essentially a product that will not rot.

“It’s made from rice husks.” he says. “Decking came into this country thirty years ago and it’s all softwood or hardwood, laid on a timber frame. But not this.”

“It’s essentially a product that will not rot. People don’t maintain their timber decking, so it gets slippery. You can’t go out in winter or you’ll fall over on it. This overcomes all that. And underneath the joists are aluminium with nylon clips, so there are no fastenings. It’s revolutionary.”

I’ve known Jon for over twenty years, as a bloke in the pub

He sensed a golden opportunity. So he dashed over to a mate who he knew would share his passion – Bill.

“I’ve known Jon for over twenty years, as a bloke in the pub,” says Bill. “Last year I sold my ad agency and was on gardening leave. I said I’ll kick it off and get the brand going.”

The pair are a perfect match. John’s the experienced carpenter. Bill the business brain. Together they founded DECKED, and came up with a strategy.

Step one: begin with caution. “With building, you don’t jump in,” says John. “You wait until you are 100 per cent certain of the whole thing.” The pair secured a unique working relationship with the novel product’s importer, Wallbarn, and kept the commercial structure lean.

“We don’t have any full time employees,” says Jon. “We have a network of sub-contractors. If the company grows then we’ll devise a bigger company structure.”

Step two: work with the best. “We did the new sports pavilion at Eton College,” says Bill. “That was for a big contractor, Feltham Construction. They thought of doing it themselves, but realised it was tricky. We put together a team of proper craftsman. The quality of installation is a big differentiator.”

Step three: have laser focus on the finances. “Building can be – and this sounds harsh – a jobbing culture,” says Bill. “We’ve brought consistency. We use Tide linked to Xero. It means we can keep an eye on all our accounts. For example, we employed six people for a job, and at the end of the week scanned their invoices and paid them. They’ve been breathless. They’ve gone, ‘What the hell happened there?’ To them something like that is rocket science.”

This approach means they’ve built rock-solid credibility. “We’ve just completed up in Sonning what you could call a 21st century stately home. You couldn’t put a bog-standard product in that sort of thing!”

At the heart of it all is a product they love, and the joy of working with a friend who believes in it as much as you do.

“Rice husks are a by-product of the rice industry in the East,” rhapsodises John. “They used to burn it, and now they manufacture it. So DECKED has got a green angle to it, because we’re not producing CO2.”

“The green angle is unexpectedly popular,” interrupts Bill. “People like the idea of something that was burned in fields and is now used in their decking.”

The pair have gigs lined up all over Sussex, in Jersey, a huge job in London. The hunch looks like being proved a winner.

Is there anything they wished they’d known before starting?

“I wish I’d realised how cold it was on a bloody building site in December.”