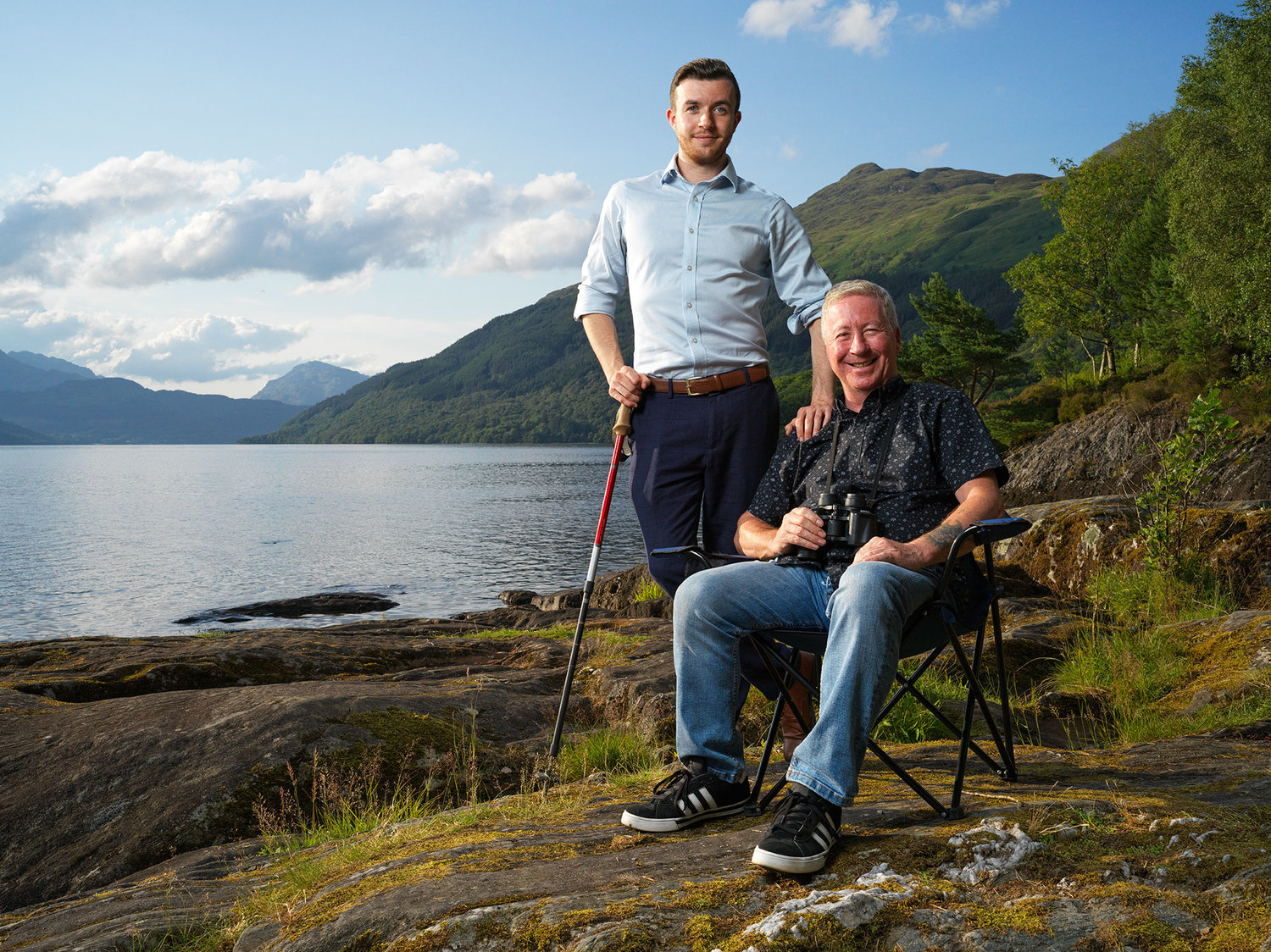 Steven and George Lindsay, the father-son team guiding tourists through the Highlands

As our community of entrepreneurs and go getters know, businesses aren’t handed to you on a silver plate. But for George Lindsay, Lindsays Highland Tours came wrapped in a bow at Christmas 🎁

The inspiration came when Steven was lying in bed at night, wondering what gift to get his dad, George. “I was thinking he’s a carer, he works really hard, and I just wanted to basically give him something back because both my dad and my mum have given myself and my brother a good life when we were younger.”

As children, Steven and his brother spent much of their time on fishing and camping trips with their dad in the Highlands, who often mentioned he’d like to start a business to take some of the care residents in his home to see the sights that Scotland has to offer.

“So, for Christmas, I decided to put a business plan in place, set up the business and then on Christmas Day I presented my dad with the business plan and a map of Scotland, and basically asked him to come up with a name for his tour company” says Steven.

In just six months, Lindsays Highland Tours has gone from strength to strength, attracting nothing but 5-star reviews.

“We’d take them round all day and all night if they wanted,” says George, who took one American family on a 19 hour tour! “You get to laugh with them as well – they’re just like family.”

This father and son duo pride themselves on offering flexible, personalised tours. “We’ll take customers wherever they want to go in Scotland: pick them up from the hotel, take them around the Highlands at their own flexible time arrangements” explains Steven. “We’d take them round all day and all night if they wanted,” says George, who took one American family on a 19 hour tour! “You get to laugh with them as well – they’re just like family.”

While many tourists want to go to well-known places such as Loch Ness, Steven tells us that one of the real jaw-droppers is Glencoe. “It’s just beautiful. It’s like something out of a film.” He adds “I either record or I turn around and I look at their faces when we’re driving up, and it’s just amazing how their eyes open up when they see it.”

Fortunately, it’s not proving to be a seasonal business. “The thing with Scotland and the weather is that it’s beautiful all year round. So, when it’s snowing, the snow and the mountains are beautiful. When it’s autumn, you’ve got the beautiful orange trees” says Steven, who’s already taken many winter bookings for their first Christmas and New Years. Of course when it rains, George and Steven have the ponchos and umbrellas at hand.

Looking back, their very first tour was with a family from North Carolina. “We got a photo with them when we went up to a place called the Rest and Be Thankful, which was nice. So, we got a Scotland flag out and got the family and we took a photo of them, which we use on our brochures now and we use on the Facebook page” recalls Steven.

In fact, the company’s biggest form of revenue comes through Facebook. “When we put photos up and share the content the videos of our tours, loads of people see how beautiful Scotland is and they want to go on a tour.”

Of course, no business comes without its road bumps. During the day, Steven works full time as an Operations Manger in financial services – where he’s been for eight years – and takes time off for tours. “Trying to balance that and the business can sometimes be testing, but I’m just getting a lot of support from the likes of my brother and my family as well, and loads of friends.” With thanks to Scotland’s beauty, lots of people share photos and help spread the word on social media, and when Steven finishes work he has plenty of messages and booking enquiries through the Facebook page.

In the not-so distant future, they plan to get a second van with wheelchair access, so George can take people in care homes up to the Highlands as he always wanted to do.

Likewise, George is juggling Lindsays Highland Tours while working as a carer. As Steven explains “The whole plan is to help my dad retire and help my mum retire as well” and the duo are hoping George will be able to work full-time on the new business soon. In the not-so distant future, they plan to get a second van with wheelchair access, so George can take people in care homes up to the Highlands as he always wanted to do.

The biggest challenge in the beginning was last-minute cancellations, particularly when Steven and George had booked time off their day jobs. “Now we just ask if we can get a deposit beforehand, which helps with that, so that it lets people cancel and if they do, we’re not out of pocket.”

It’s simplicity and efficiency that attracted the duo to Tide. “I tried to set up a few business accounts with other providers and every one of them wanted a copy of some bills from the last three months for both directors, for me and my dad. And with me living in Edinburgh, my dad living in Glasgow, it was quite difficult” says Steven.

“Whereas with Tide, I didn’t have to do all of that. It was really simple, I set it up in about five minutes which was fantastic” he recalls. “I can open up Tide, the app, and I can make a payment in less than ten seconds from start to finish. Everything needs to be instant. I think that’s the difference between the likes of Tide and a lot of the other brands.”

Discussing things they wish they’d known sooner, Steven says “I think probably just how good my dad is at being a tour guide. How successful it’s been. If I knew that ten years ago, I’d have started it ten years ago. I think that’s the biggest regret.”

With an exciting goal to show someone from every country what Scotland has to offer, and long-term international growth plans, there’s an exciting journey ahead for Lindsays Highland Tours.