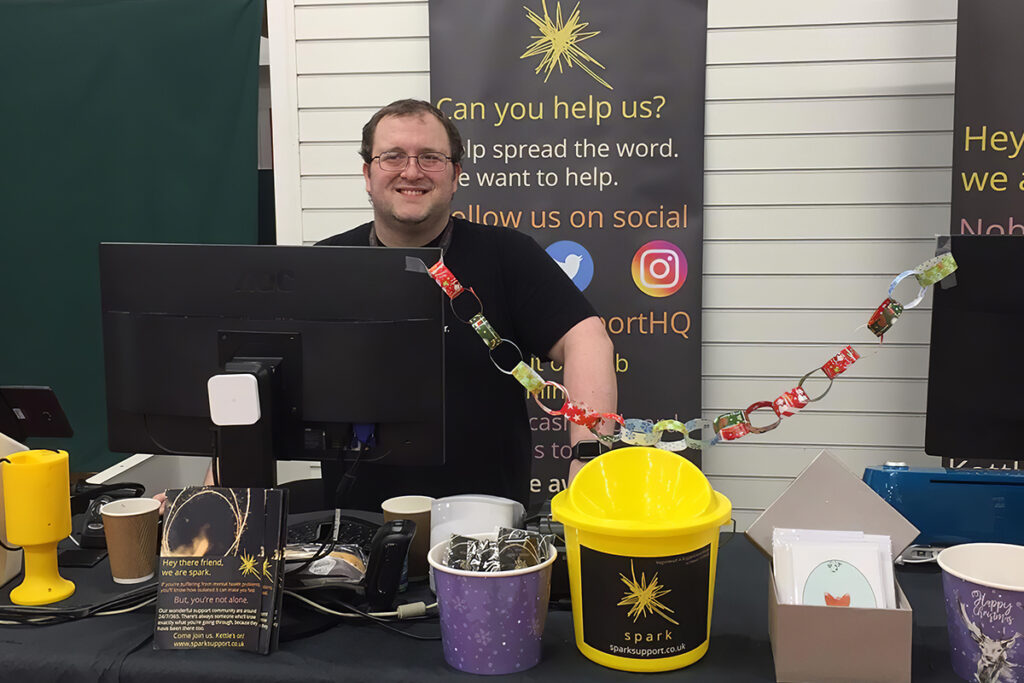 With 1 in 4 people reporting mental health issues, yet only 1 in 6 people willing to talk about it, it’s time to break down barriers. Fortunately, Spark Support is a global mental health charity, dedicated to igniting conversations and connecting people to help change those statistics.

Spark is a peer support group that’s based on Facebook. ‘If you want to talk to us, we’re there in the palm of your hand 24/7, 365 days a year,’ explains Gareth Molyneux, CEO of Spark. ‘You can dive in and out as much as you want. We’re there if you need us but if you want to turn us off for a bit, you can,’ he adds.

The success of the group comes from its members sharing their experiences with each other. ‘Some of the best advice we’ve had is when people have just plucked up the courage and said, ‘Look, I’m having this issue,’ and people have responded, ‘You know what? You’re not the only one. I had that too, don’t worry,’’ explains Gareth.

Rather than turning to Google and often finding some terrifying answers, people can turn to the Spark community and speak to people who have lived through a similar experience. ‘It also helps to have people respond, ‘I’ve been where you are. I’m now here. If I can do it, you can too,’’ adds Gareth.

Spark is now making waves globally. ‘We have about 1,400 members in the group now, in around 70 countries,’ says Gareth. The group is open to everyone, and the only requirement is that you must be of the legal age to use Facebook.

‘Our members love connecting online, but people often say, ‘I’d love to come and meet you guys’. One of my dreams is to do a pop-up mental health cafe – in different places around the country,’ says Gareth.

We need to stop using phrases like ‘man up’. I think it takes more guts to say, ‘Do you know what? I’m not having a good day today,’ than to say ‘I’m fine.’’

One staggering statistic is that suicide is the biggest killer of men between 19 and 30 in the UK but only 10% of Spark’s membership is male. So how can we get more men talking about mental health? ‘That is a question that keeps me awake at night,’ says Gareth. ‘We need to let them know that it’s okay. Stop using phrases like ‘man up’, because I think it takes more guts to say, ‘Do you know what? I’m not having a good day today,’ than to say ‘I’m fine.’’

At Tide, our members are a brilliant bunch of entrepreneurs, founders, and non-stop startups. There’s no doubt that stress, loneliness and burnout are common issues – no matter where you are on your journey.

Imposter syndrome – when you suffer from self-doubt and feel like a fraud – is common, particularly in the early days, and can feel very isolating. ‘You’re the boss so you’ve got no-one to answer to but it also means you’ve no-one to take direction from,’ explains Gareth. How can founders alleviate these feelings? ‘You’ve got to step back,’ says Gareth. ‘That is the best piece of advice I can give anybody: step away from your desk for five minutes. Go get a cup of coffee, not from the machine. Get out. Leave the building.’

Finding a quiet place to meditate or just sit for five minutes can make a difference. ‘If you have an Apple watch or similar, the Breathe function is great. Set it to remind you to just sit back and just follow the taps on your wrist for the breathing. It’s so helpful,’ explains Gareth. Small changes like signing out of work channels like Slack and turning off notifications to separate your work from personal life can also be powerful.

For employers and teams, Gareth recommends a course called Mental Health First Aid. ‘It’s fantastic. It’s two days but you learn so much about mental health and how to be a mental health first responder.

At Tide, our very own Events Manager, Cuan, is passionate about men’s mental health – so much so, he started monthly meets called ‘Time to Listen’ in the Tide offices.

You might also be interested in:
How to look after your mental health and combat loneliness as a startup founder
Guidance from us at Tide and our members.

Spark is a digital-first company, so when it came to choosing a business bank account, Tide was the clear option.

‘I needed something digital and quick,’ says Gareth. ‘Setting up my Tide account was simple. I’d seen your advertisement on Facebook, believe it or not!’ Gareth particularly loved how fast he was able to open his Tide account: ‘It took me about two minutes and then I had my account number. I thought, ‘Wow! Already?! I can’t believe it.’

Listen again: A conversation about mental health with High Definition You (Instagram Live)

Christopher Weeks and Alastair Byrne, the startup founders looking out for your mental health